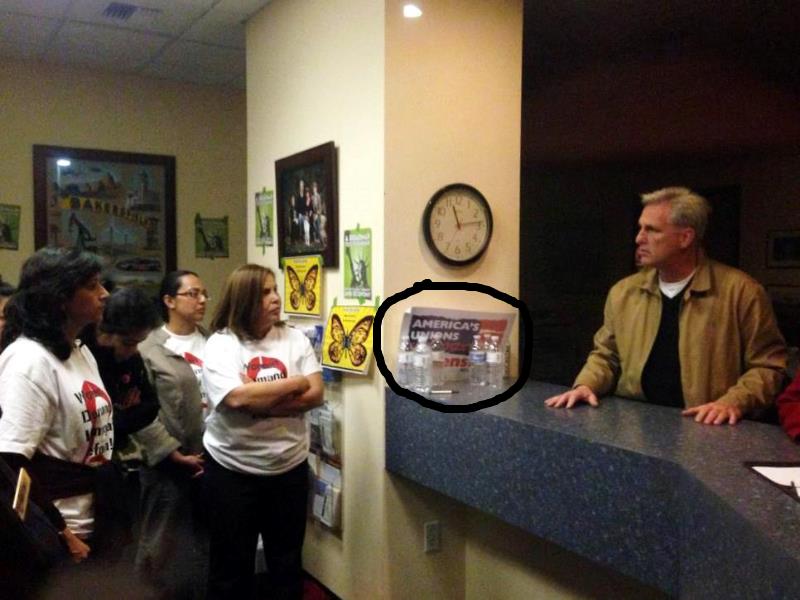 202-225-2915 or dial the 24 hour, toll free switchboard at 866.220.0044.  If it is after business hours, leave a voice mail message.  http://kevinmccarthy.house.gov/
In the Reform Immigration For America report below, Angelica Salas (of Los Angeles who came to the USA illegally and is now a naturalized American citizen and an activist attorney) boasts about commandeering Majority Whip Kevin McCarthy’s Bakersfield, CA, office. McCarty and his wife finally agreed to meet with the group at 11pm.   Angela Salas, Chairwoman of Coalition for Humane Immigration Los Angeles CHIRLA, is next to McCarthy, arms folded. She is a frequent protestor at CA Republican Congressman Gary Miller’s Rancho Cucamonga district office.

Last week I was locked into Rep. Kevin McCarthy’s office for ten hours with 12 brave women, all of us fighting for immigration reform. The Bakersfield Police Department tried to intimidate us by cutting us off from our hundred supporters outside, thinking we would get tired, hungry or even disillusioned and give up.   They were wrong. We held our ground, knowing activists like you were with us. Together, we forced the House Majority Whip to meet us in person that night.   House Republican leaders are trying to stall us with a lack of action on immigration reform, as if we would give up. Prove them wrong — make a call to a key representative in California now at 888-704-9446.   They thought they could wait us out. They withheld food and medication from the “Bakersfield Dozen,” but that obviously did not work. Our supporters were determined and so boisterous that their throats ached from chanting. At 11PM on November 6, Rep. McCarthy and his wife came into the office, visibly upset but willing to talk with us.   We told him our stories and engaged in a conversation about his lack of leadership in advancing immigration reform. The House Majority Whip assured us that he is “serious about solving the problem” but as of Friday publicly stated that the House would NOT vote on immigration reform this year.   Republicans think they can hold us off but we have more actions in the works, in California and across the country. We are many and they are few. We will show the House we are serious in our demand for action in the House before the year’s end.   Call a key California representative and let them know we make good on our promises. Demand they call a vote on immigration reform in 2013 or face our wrath at the polls in 2014.