According to the Huntington Park website:
http://www.hpca.gov/index.aspx?NID=56
The City Council serves as the legislative body and consists of five members, who are elected at large by registered voters of the City of Huntington Park.

2 immigrants in U.S. illegally are named to Huntington Park commissions

Julian Zatarain always assumed the doors of City Hall were closed to him because he is here illegally, arriving from Sinaloa in 2007 when he was 13.

The 21-year-old college student found other outlets for service, such as volunteering for the Red Cross and with an organization that helps young people like him get access to educational resources.

“I’m speaking out for people like me,” Zatarain said. “I’m not doing anything wrong.”

Their appointments mark a bold — and controversial — step by the small southeast Los Angeles County city to boost the participation of these immigrants in city government.

The working-class communities along the 710 Freeway have long been entry points for immigrants from Mexico and Latin America — a good portion arriving illegally.

The demographics have resulted in much lower-than-average voter turnout, with some elections dropping below 10% in the last decade. In one election in Bell, only 2% of the voting-age population cast ballots; balloting in nearby South Gate brought out only 3%.

There is also the belief that the lack of civic engagement has helped foster the corruption that has plagued city halls across southeast L.A. County, most notably the Bell scandal over public officials’ salaries that resulted in national headlines and multiple criminal convictions of top leaders.

People who are in this country illegally cannot vote or seek elected office, but officials in Huntington Park said their status should not stop them from helping govern in other ways.

“Our population includes documented and undocumented immigrants, and I wanted to make sure everyone could participate,” Huntington Park Mayor Karina Macias said. “If we’re going to talk about transparency, being open and having a community that’s involved, then the conversation also has to include undocumented immigrants. I’m hoping other cities are looking at what we’re doing here.”

Macias said the city began accepting new applications for commission posts two months ago, and officials began wondering what would stop them from appointing people who are living in the country illegally.

State law does not prohibit people who are in the country illegally from serving as appointed commissioners.

Julian Zatarain, left, says the pledge of allegiance before being appointed to the Huntington Park Parks and Recreation Commission. He has lived in the country illegally since age 13.

Both men are required to undergo full background checks. And unlike other city commissioners, Zatarain and Medina won’t receive a monthly stipend, which generally ranges from $25 to $75.

“These two gentlemen have thousands of hours of volunteer work,” said Jhonny Pineda, a Huntington Park councilman who formally appointed both men. “They are qualified but it just turns out they are undocumented.”

Experts say the move reflects a growing effort in heavily Latino cities to push for more inclusion of people without legal status in public life. Several years ago, Maywood — which is next door to Huntington Park — made national headlines by declaring itself a “sanctuary” for those who are in the country illegally and repealed practices that some considered anti-immigrant.

John Noguez, former LA County Assessor, began his criminal career in Huntington Park, where he ran for city council while working at the LA County Assessor’s Office. At that time, he traded property tax reductions for campaign contributions. Career politicians have no one’s interest…

“It’s all about inclusion in civic engagement and also about using the resources a city has, and the No. 1 resource in any city are its people,” said Fernando Guerra, a political science professor who also serves as director of the Center for the Study of Los Angeles at Loyola Marymount University.

This inclusion is also occurring at the state level. California this year began issuing driver’s licenses to people without legal status. This summer, the California Legislature passed a measure that provides healthcare to many immigrants who are in the country illegally.

The U.S. Census Bureau last month said Latinos are now the largest ethnic group in California. But Latinos still have lower income levels than whites, and many believe the low voter turnout is blunting their political influence.

Reaction to the appointments has been decidedly mixed inside and outside Huntington Park.

Linda Caraballo, a former councilwoman and resident of Huntington Park, said that while she doesn’t oppose the people who are in the country illegally, she is against the appointments of the two men, fearing it would produce bad press for the city.

“There are more qualified people,” she said. “How could they be policy advisors if they can’t even vote for the council members? This is just going to bring media attention, it’s going to create national debate and it is something the city of Huntington Park doesn’t need.”

“To appoint commission seats to individuals who are breaking federal laws demonstrates that lack of respect for U.S. law,” she said.

But others argued that it’s important for immigrants to feel like they have a stake in how their communities are governed. When more people care about these issues, the chances of corruption are lessened, said Antonio Gonzalez, president of the William C. Velasquez Institute — a Latino-focused public policy and research organization.

“The environment of where corruption flourishes is an environment where there is almost always a low level of scrutiny in monitoring and accountability and that is always characteristic of low level civic engagement,” he said. “The participation in commissions is a logical and healthy step forward.”

Zatarain, who is attending Santa Monica College, said he chose the parks and recreation commission because he believes he can help the city provide better services for residents.

He said he first thought about getting involved in government after the city picked a new trash hauler and garbage started piling up on streets.

“I was upset,” Zatarain said. “Why was my city dealing with this…? I came to realize, I wanted to get involved and help.”

Framework for CollaborationBetween California and Mexico 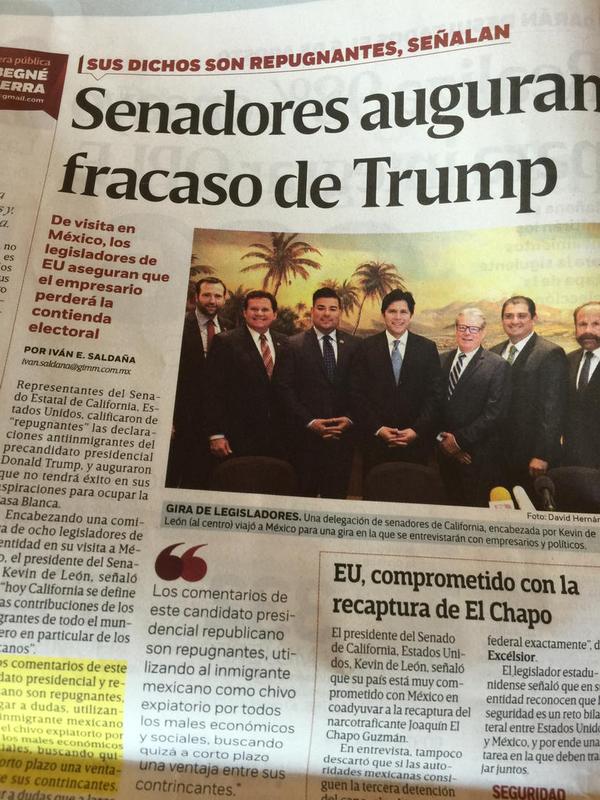 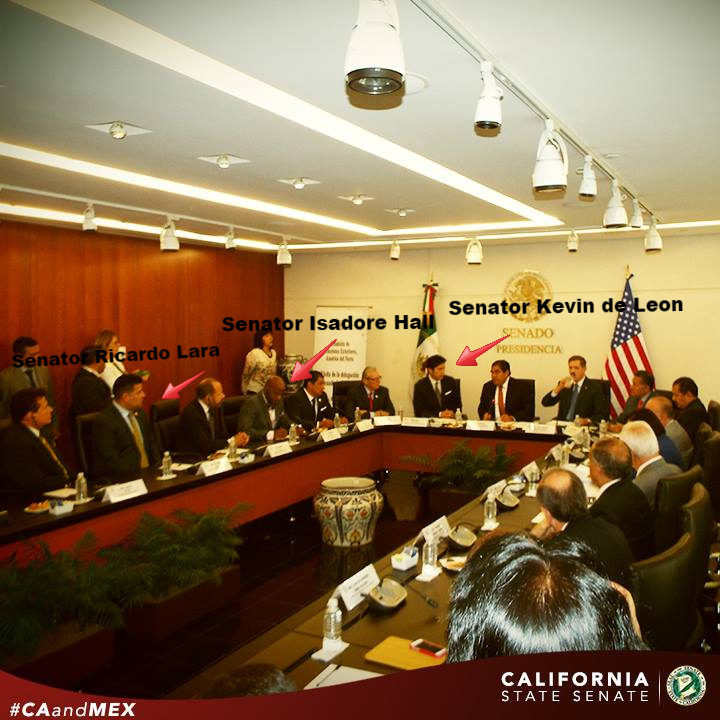 Great meeting with our counterparts in Mexico finding common areas of collaboration (NOTE: THIS IS UNCONSTITUTIONAL)  to protect our shared environment and improve access to education! ‪#‎CAandMex‬ 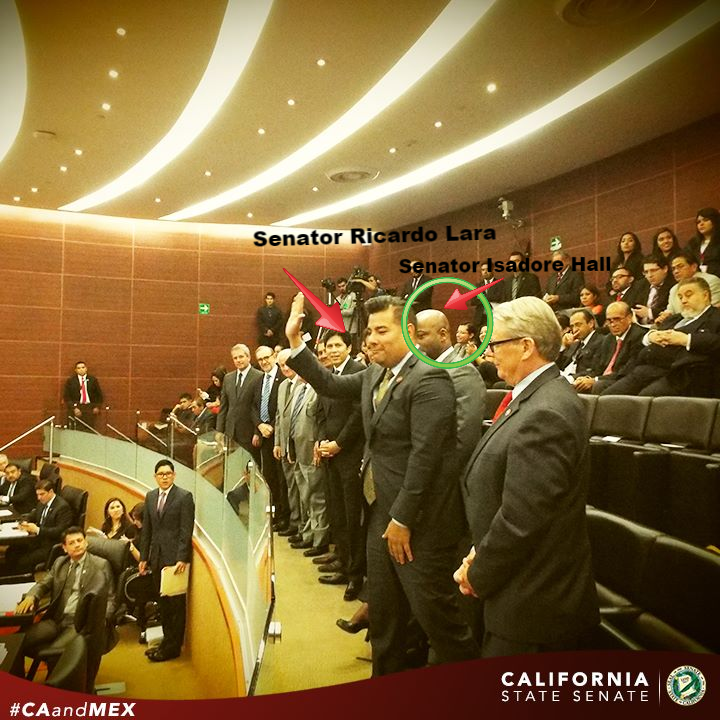 Many thanks to the Mexican Senate for introducing us during their joint session. We signed a climate change agreement to ensure that we are working collaboratively to reduce carbon emissions.#CAandMEX 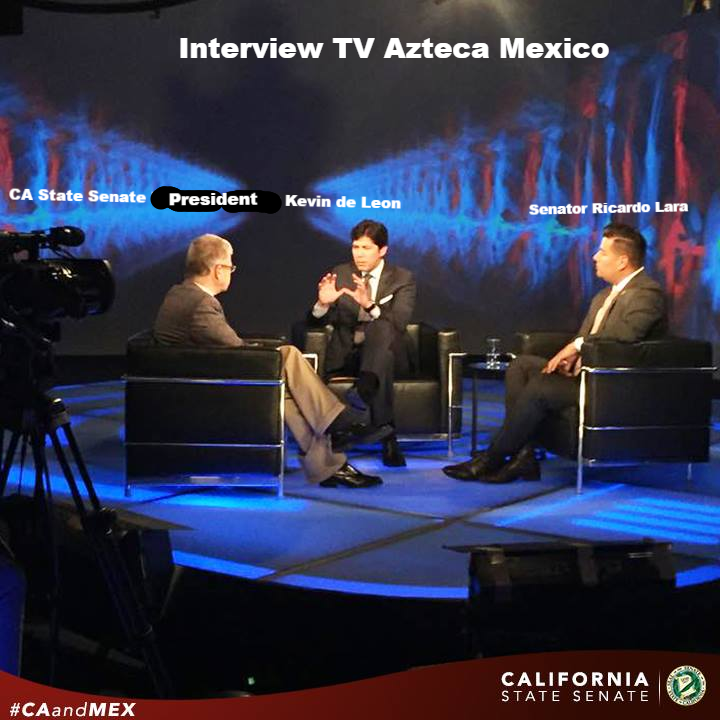 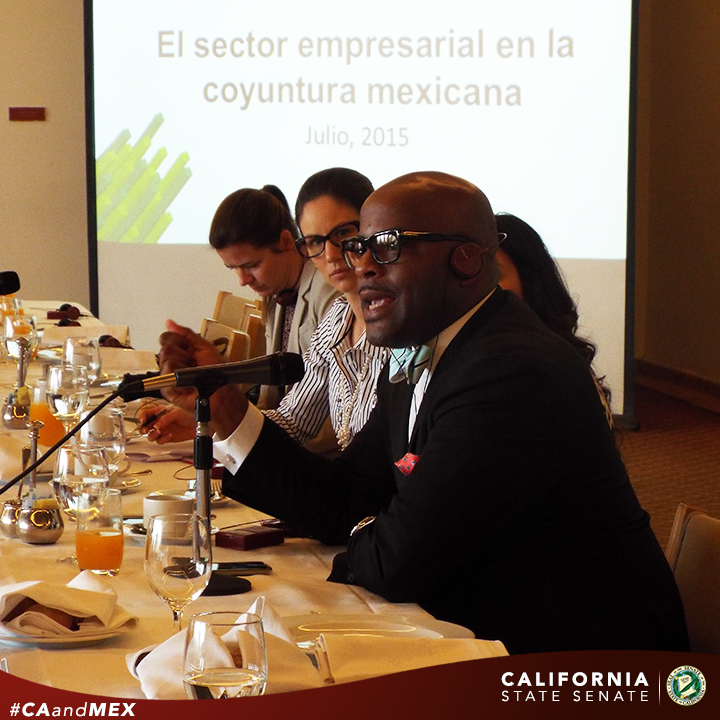 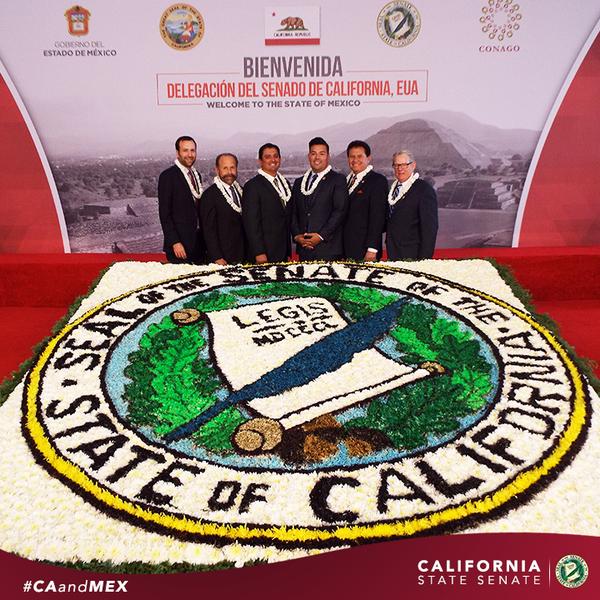 California State Senate Delegation pose in front of welcome sign at the office of the Honorable Dr. Eruviel Avila Villegas, Governor of the State of Mexico. 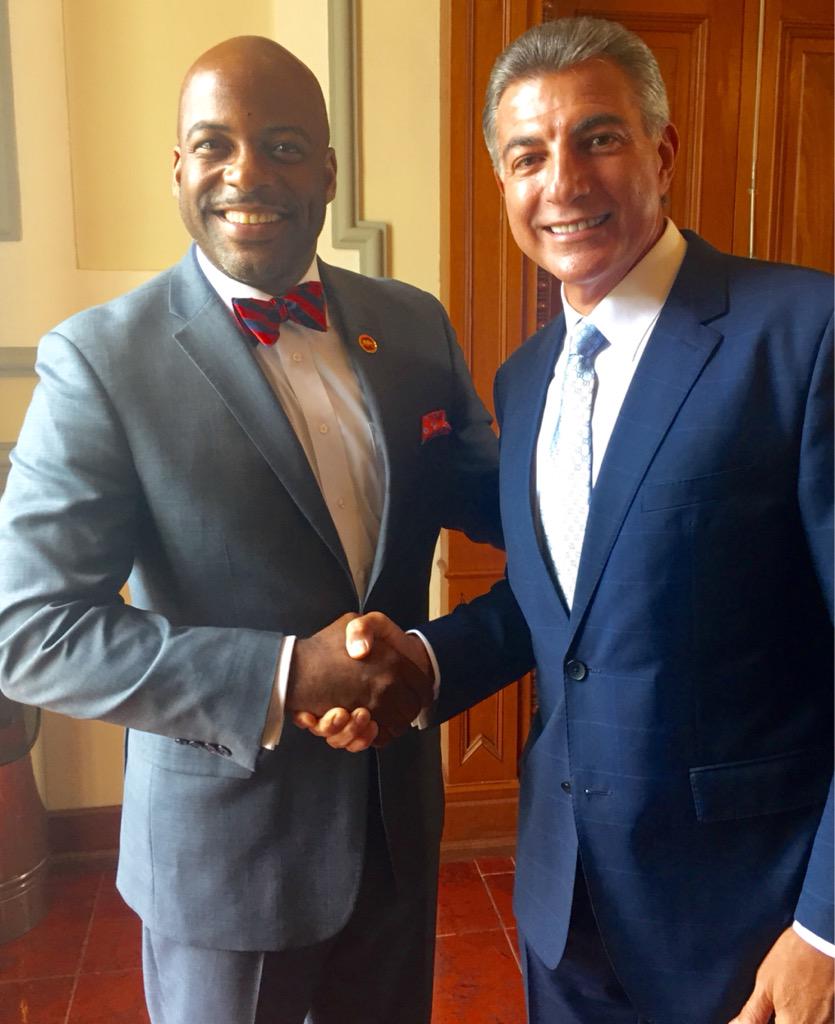 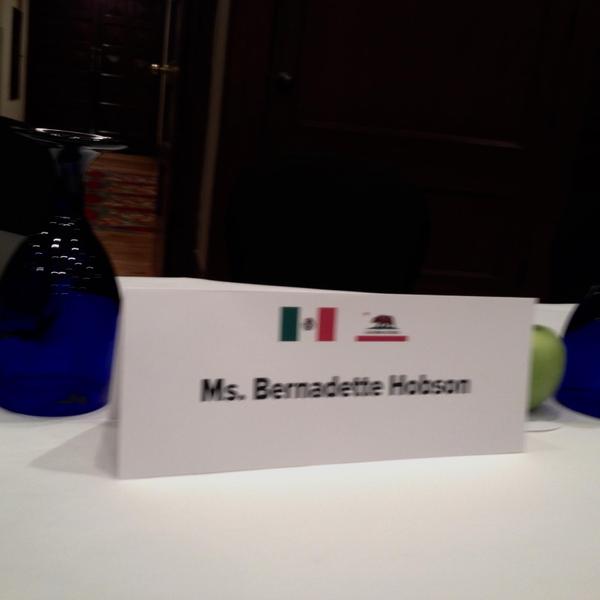 July 24, 2015
Visit Builds Meaningful Framework for Collaboration Between California and Mexico
California State Senate President pro Tempore Kevin de León will lead a delegation of eight Senators to Mexico City to strengthen the positive economic, environmental, governmental, and cultural ties between California and Mexico.
The Senators will meet with top Mexican government officials and business leaders to identify areas of collaboration in economic development, renewable energy, and to strengthen our ongoing partnership in tackling climate change and protecting the environment. The delegation will also discuss ongoing efforts on both sides of the border to lift local communities out of poverty and provide greater access to education, healthcare, job opportunities and safe environments.
The delegation consists of Senators Ben Allen, Marty Block, Kevin de León, Isadore Hall III, Jerry Hill, Ben Hueso, Ricardo Lara, and Bill Monning. The Senate Office of International Relations http://soir.senate.ca.gov organized this trip in collaboration with the Consul General of Mexico in Los Angeles.
To kick it off on Monday at 10:15 a.m., in Mexico City the delegation will hold a media availability at the JW Marriot Hotel Polanco, in the Bosques Meeting Room.
Monday, July 27, 2015
Mexico City and Toluca, Mexico
The Delegation will meet with Ambassador Anthony Wayne to discuss the current political landscape in Mexico and receive an update on U.S.-Mexico affairs.
That meeting will be followed by a visit to Toluca, the capital of the State of Mexico where the Senators will meet with the Honorable Dr. Eruviel Avila Villegas, Governor of the State of Mexico.
Tuesday, July 28, 2015
Mexico City
As a follow up to last year’s meeting in California, the Senators will meet with the Honorable Dr. Jose Antonio Meade Kuribreña, Secretary of Foreign Affairs.
There will also be a meeting with the Honorable Juan Jose Guerra Abud, Secretary of the Environment and Natural Resources, to discuss the California-Mexico Memorandum of Understanding to Enhance Cooperation on Climate Change and the Environment and what further action can be taken to strengthen collaboration.
Wednesday, July 29, 2015
Mexico City
The Senators will meet with the President of the Mexican Senate, the Honorable Miguel Barbosa Huerta and with the Honorable Marcela Guerra, Chair of the Senate Foreign Relations Committee on North America to discuss climate change, health, and education. The meeting will focus on addressing the barriers migrant American children face when entering the Mexican school system.
Thursday, July 30, 2015
Puebla, Puebla
The Senate Delegation will visit the State of Puebla to meet with Governor Rafael Moreno Valle, the President and members of the Puebla Congress and the Mayor of the City of Puebla Antonio Gali to discuss areas of mutual interest between California and Puebla.
#CAandMex 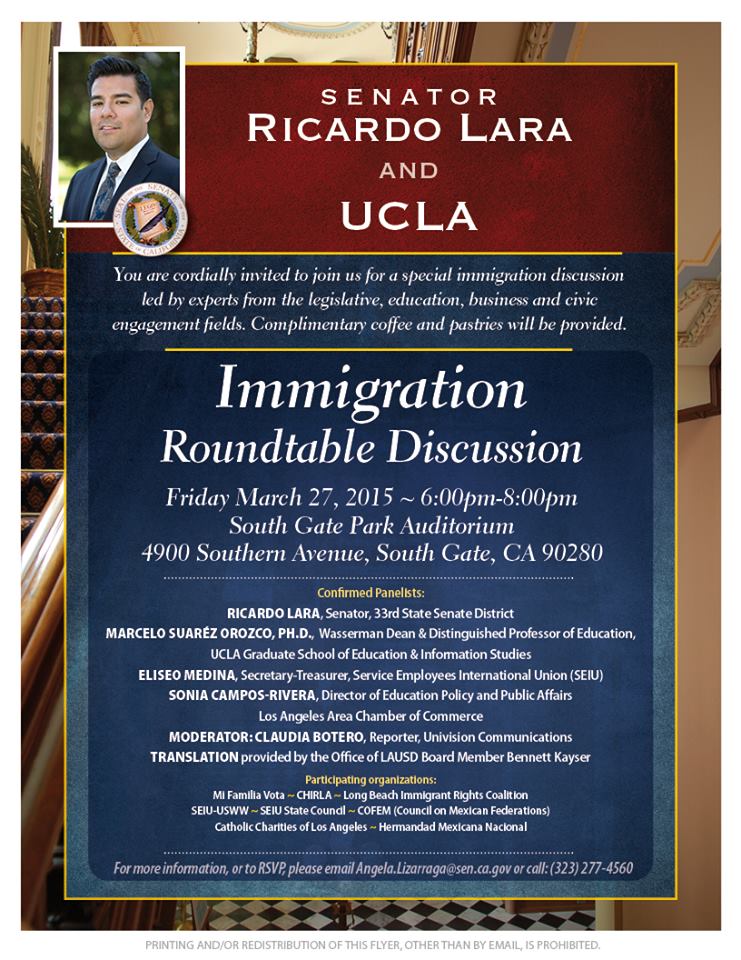