Pennsylvania State Sen. Mario Scavello (R-Mount Pocono) is proposing a plan that will redirect President Joe Biden’s flights of border crossers and illegal aliens from Pennsylvania to the president’s home state of Delaware. 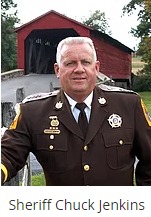 Frederick, MD
THANK FREDERICK COUNTY SHERIFF CHUCK JENKINS because when a Maryland judge ruled that a dangerous criminal alien, a county jail inmate, could be released back into the community, Frederick County Sheriff Chuck Jenkins turned the illegal alien over to ICE!
https://www.frederickcosheriff.com/office-of-the-sheriff
EMAIL:  CJENKINS@FREDERICKCOUNTYMD.GOV

FREDERICK, MD – On Tuesday, police arrested Juan Chica-Pereira, 29, after he reportedly assaulted three officers. He was being taken into custody for drunk driving and a hit-and-run.

Chica-Pereira was charged with three counts of assault on a police officer, resisting arrest, possession of cocaine, possession of a controlled dangerous substance (fentanyl), possession of drug paraphernalia, DUI, hit-and-run and an additional 18 traffic violations, including driving without a license.

Incredibly, despite the obvious danger and flight risk this illegal alien poses, a Frederick County District Court Commissioner, ordered Chica-Pereira released on his own recognizance.

Fortunately, Frederick County Sheriff Chuck Jenkins, unlike nearly all officials in the ‘sanctuary state’ of Maryland, continues to enforce the law, and has continued to work with U.S. Immigration and Customs Enforcement (ICE), and refused to release Chica-Pereira.

*In a country filled with elected officials who have appeared to turn their backs on law enforcement, and in turn, have left law-abiding citizens at the mercy of violent criminals, Sheriff Chuck Jenkins should be congratulated for his unwavering commitment to his oath of office.

Thank you Sheriff Jenkins for upholding the law and continuing to protect the public!

Please send your messages of support to Sheriff Jenkins…