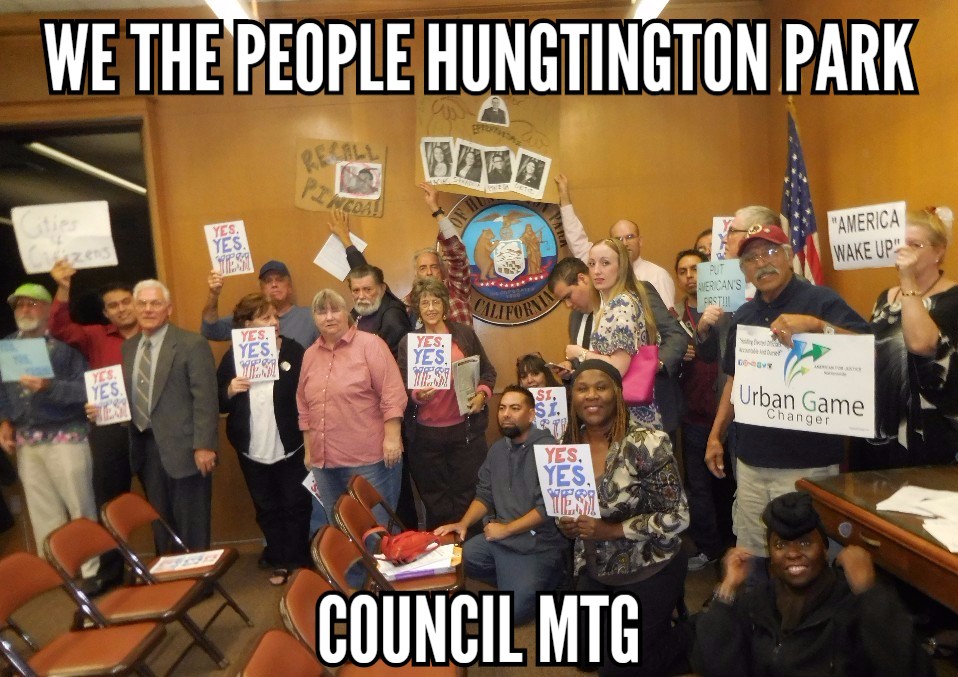 Above photo, when the Huntington Park City Council, shut down the meeting and headed into a closed session after voting to move public comments to the end of the city council meeting, citizens headed to the overflow room of the chambers  and held an impromptu We The People Huntington Park Council Meeting.

VIDEO: Mayor “runs away” from citizen at the end of the city council meeting 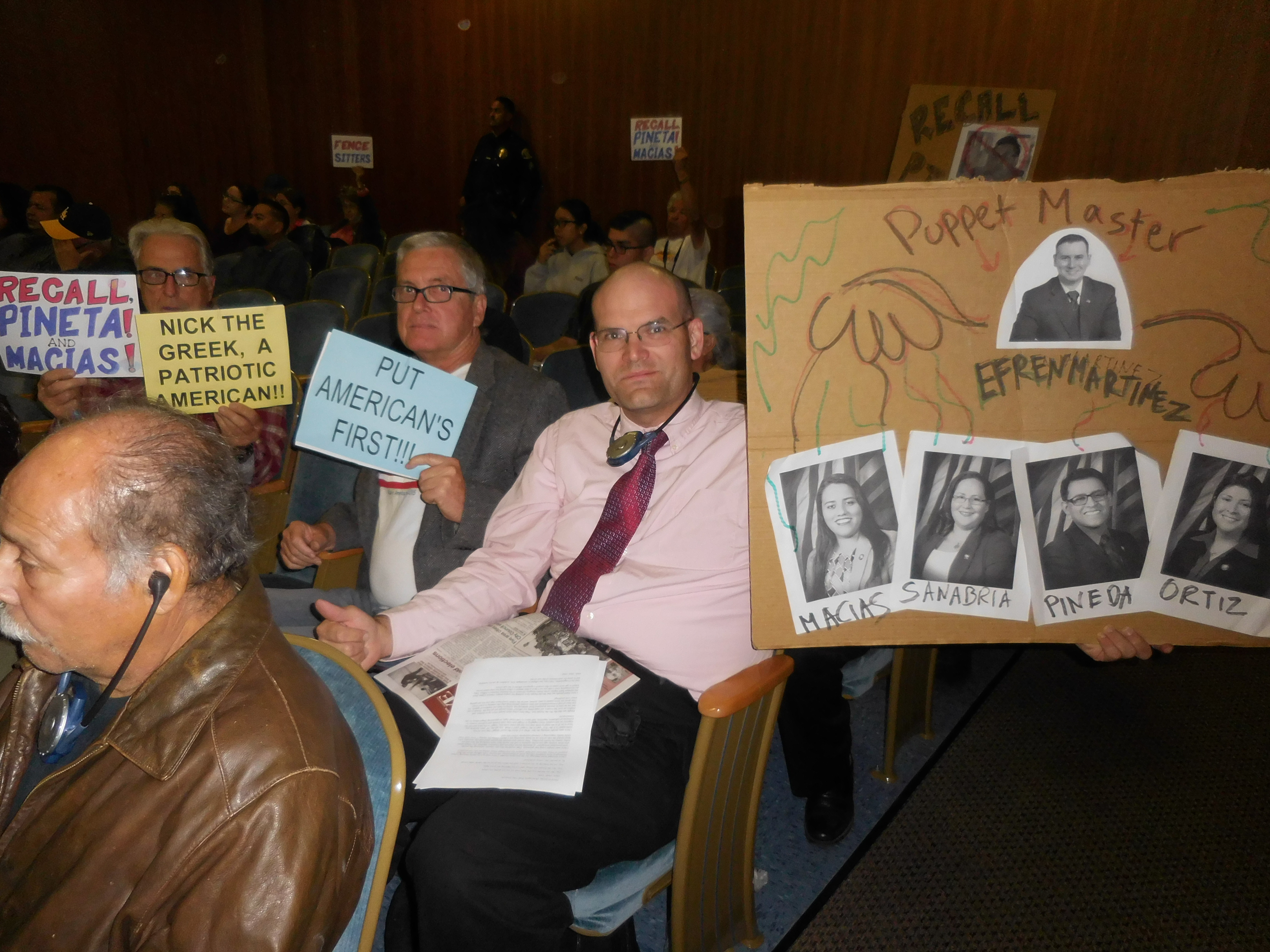 Passionate citizens – displaying signs – have been attending every Huntington Park City Council since August 4, 2015.  During public comments, citizens are demanding that the 2 illegals appointed to commission seats be removed from those positions.

PUBLIC COMMENTS HAVE ALWYS BEEN AT THE BEGINNING OF THE HUNTINGTON PARK CITY COUNCIL MEETING.

But that changed at the Nov 3rd city council meeting… 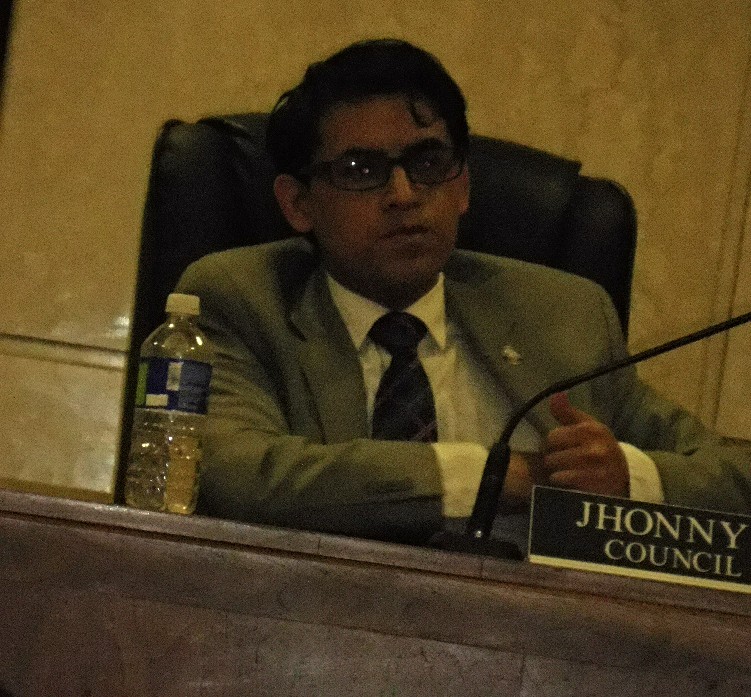 Huntington Park City Councilman Jhonny Pineda – the councilman who appointed the 2 illegals to commission seats – introduced a motion that non-agenda public comments would only be allowed at end of the council meeting. The council voted in favor of the motion by 4 – 0, and then the council members headed to an adjacent room and shut the door for aCLOSED DOOR MEETING.

COUNCIL GOES INTO CLOSED SESSION
So The People Held Their Own “OPEN SESSION” Huntington Park Council Meeting In The Overflow Room of the City Council.

Here is a video of the WE THE PEOPLE Huntington Park Council Meeting.
https://www.youtube.com/watch?v=nSkQuQtGZKs 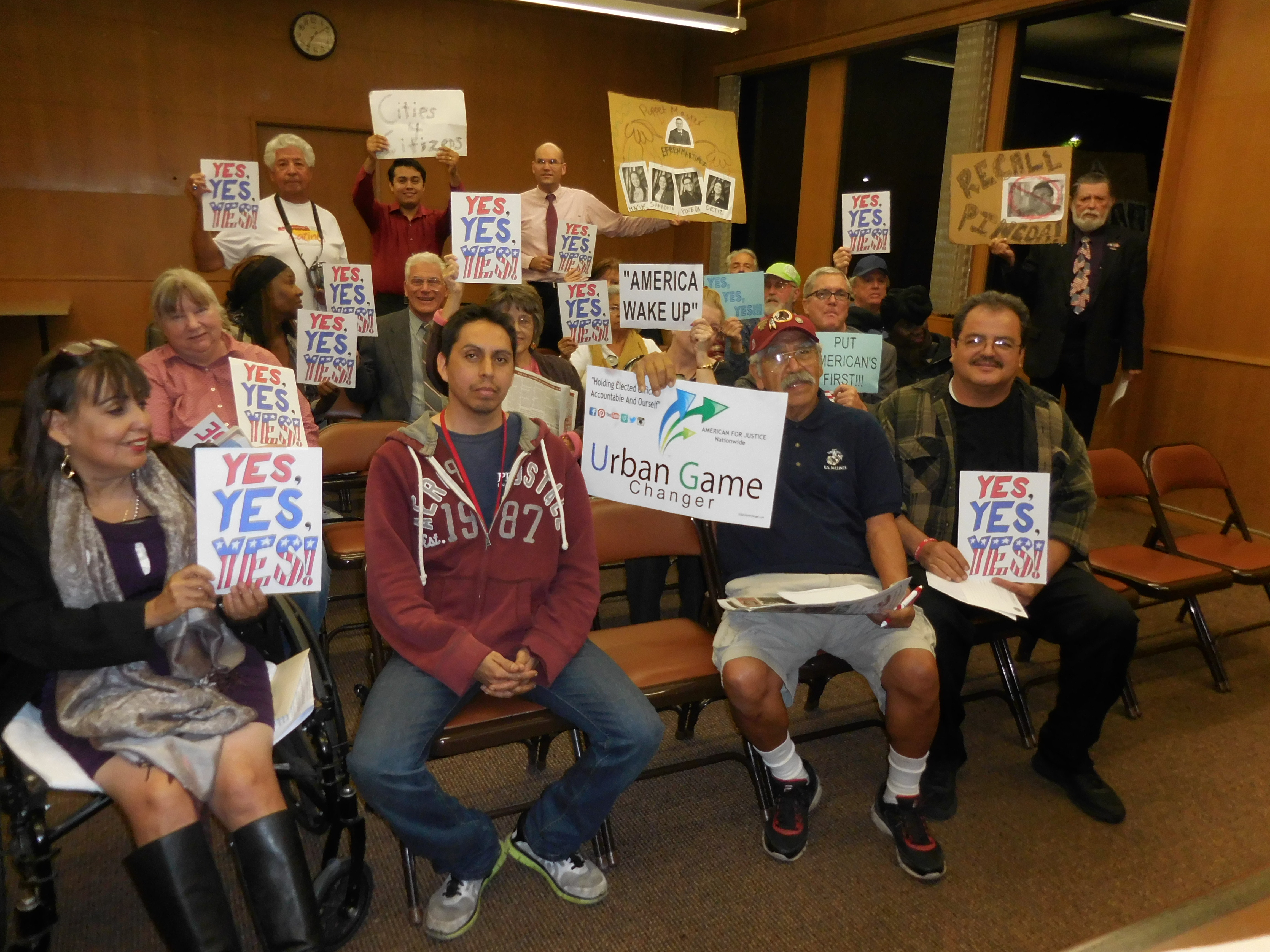 Above photo, THE PEOPLE held their “council meeting” in the overflow room of the chambers as the Huntington Park City Council voted 4 – 0 to move public comments to the end of the meeting and then headed into a closed door meeting. YES YES YES signs were displayed to honor Dr. Robert Newman who was removed by police at the 10/3/15 Huntington Park City Council Meeting for saying, “YES YES YES.” 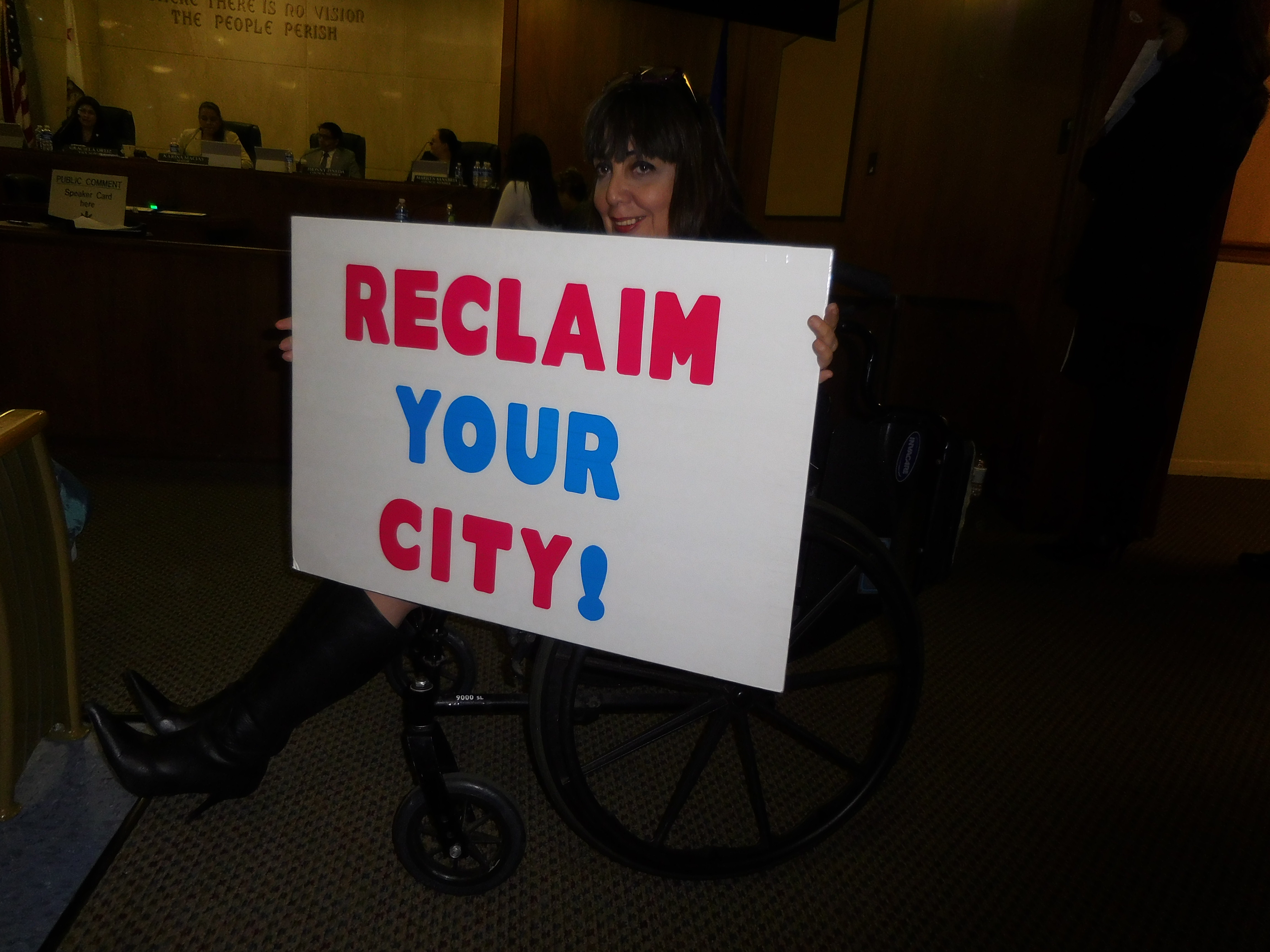 16 public speakers spoke out and called for the 2 illegals to be removed from the commission seats and 0 spoke in favor of the appointments.

Since they had to remain for the entire meeting, a group with RECALL the mayor and city council signs sat directly behind that podium so that viewers at home and on the Internet would be able to read the signs as the meeting was televised and posted on the Internet. Below is a screen shot as a staff member spoke at the podium.

POLICE MONITORED THE SIGN HOLDING CLOSELY AND FORCED LARGER SIGNS TO BE MOVED TO THE BACK OF THE COUNCIL CHAMBERS. 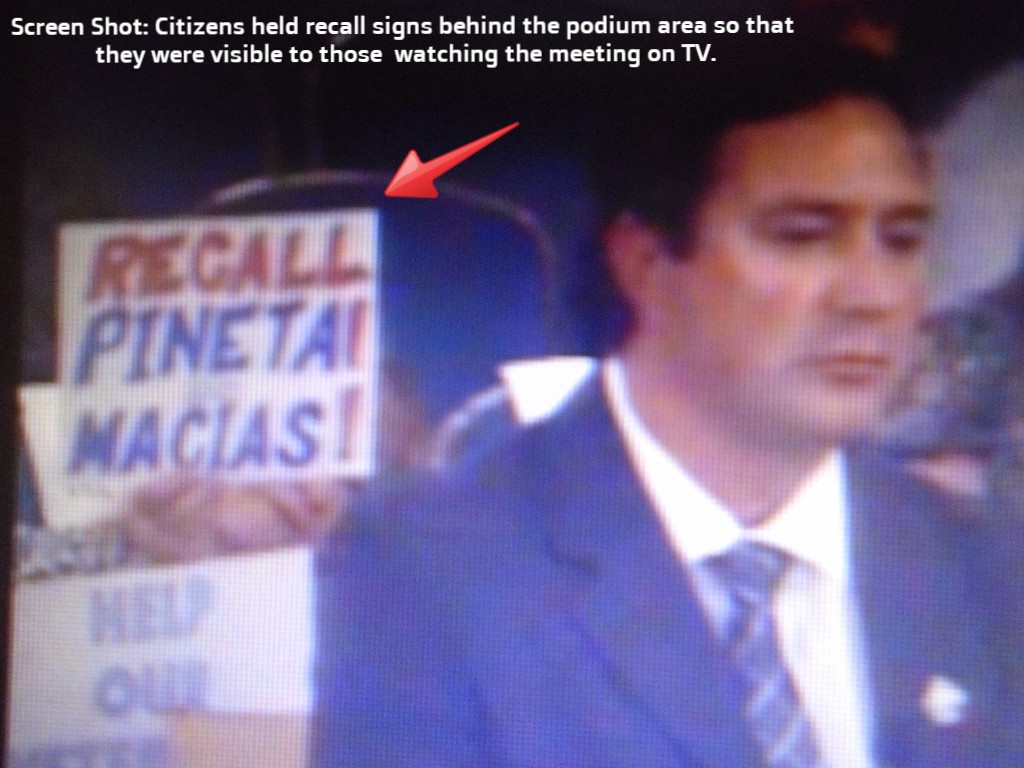 Officers, below, consulted about the sign holding and then the officer on the left stationed near the sign holders and monitored them.

Eventually, he made them move “larger signs” to the back of the room. 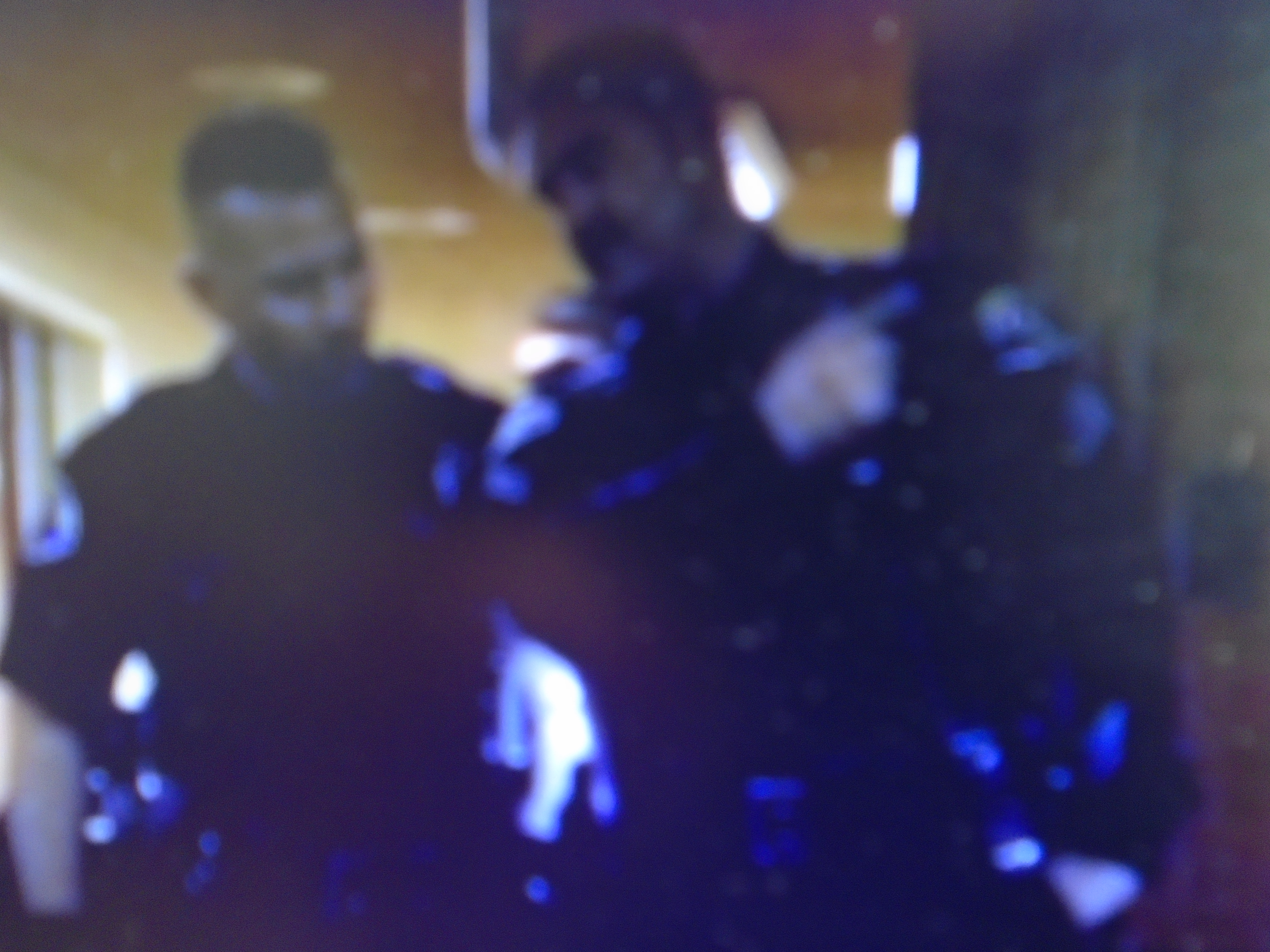 Below, one of several actions taken by the officer to move the signs he said were too large. 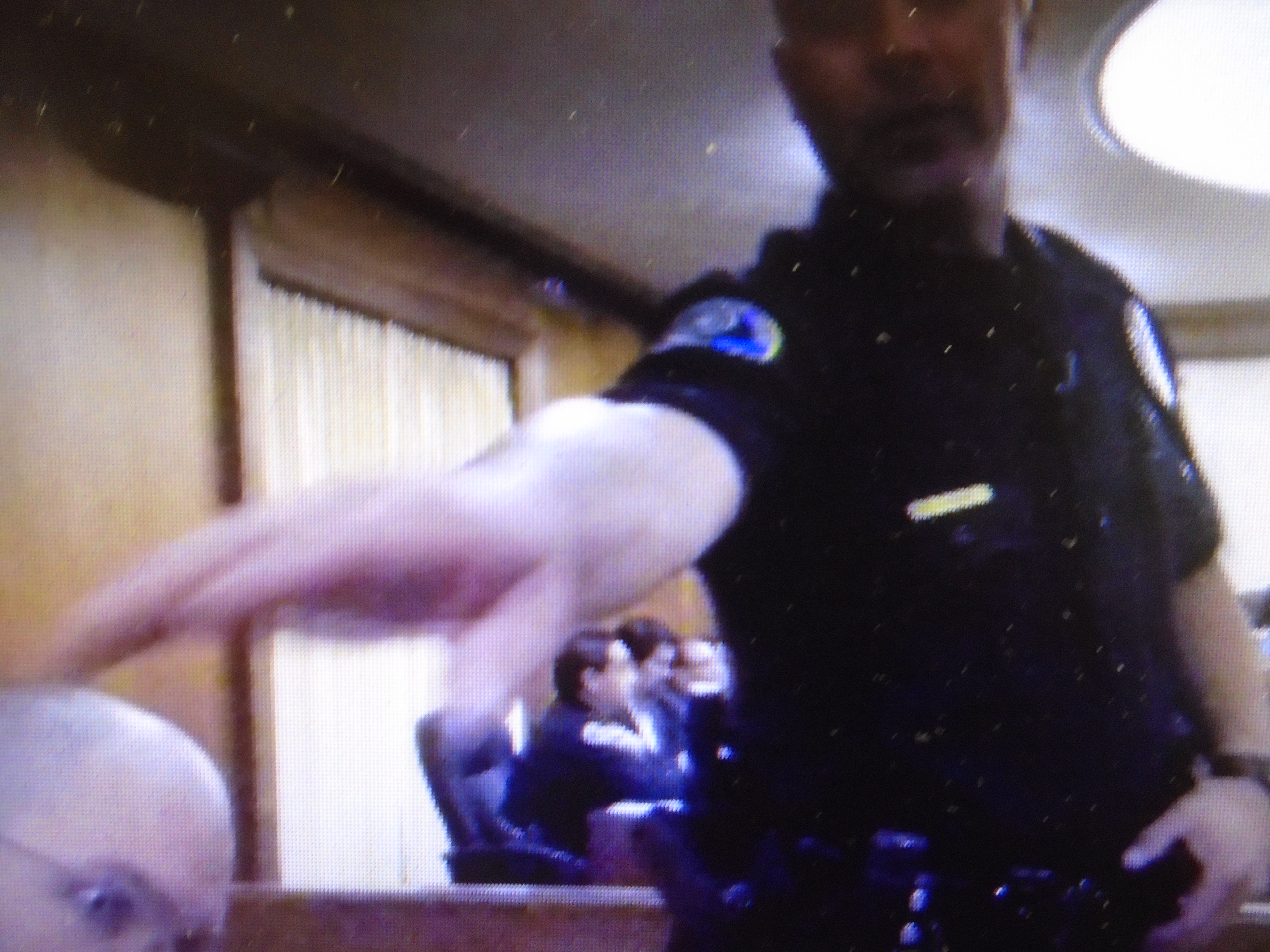 In the spirit of support for Dr. Robert Newman, when he was removed by police from the 10/3/15 Huntington Park City Council Meeting for saying, “Yes, Yes, Yes,” during public comments, signs stating  YES YES YES were displayed.
FILE VIDEO: https://www.youtube.com/watch?v=MlSk2PAO4Pg 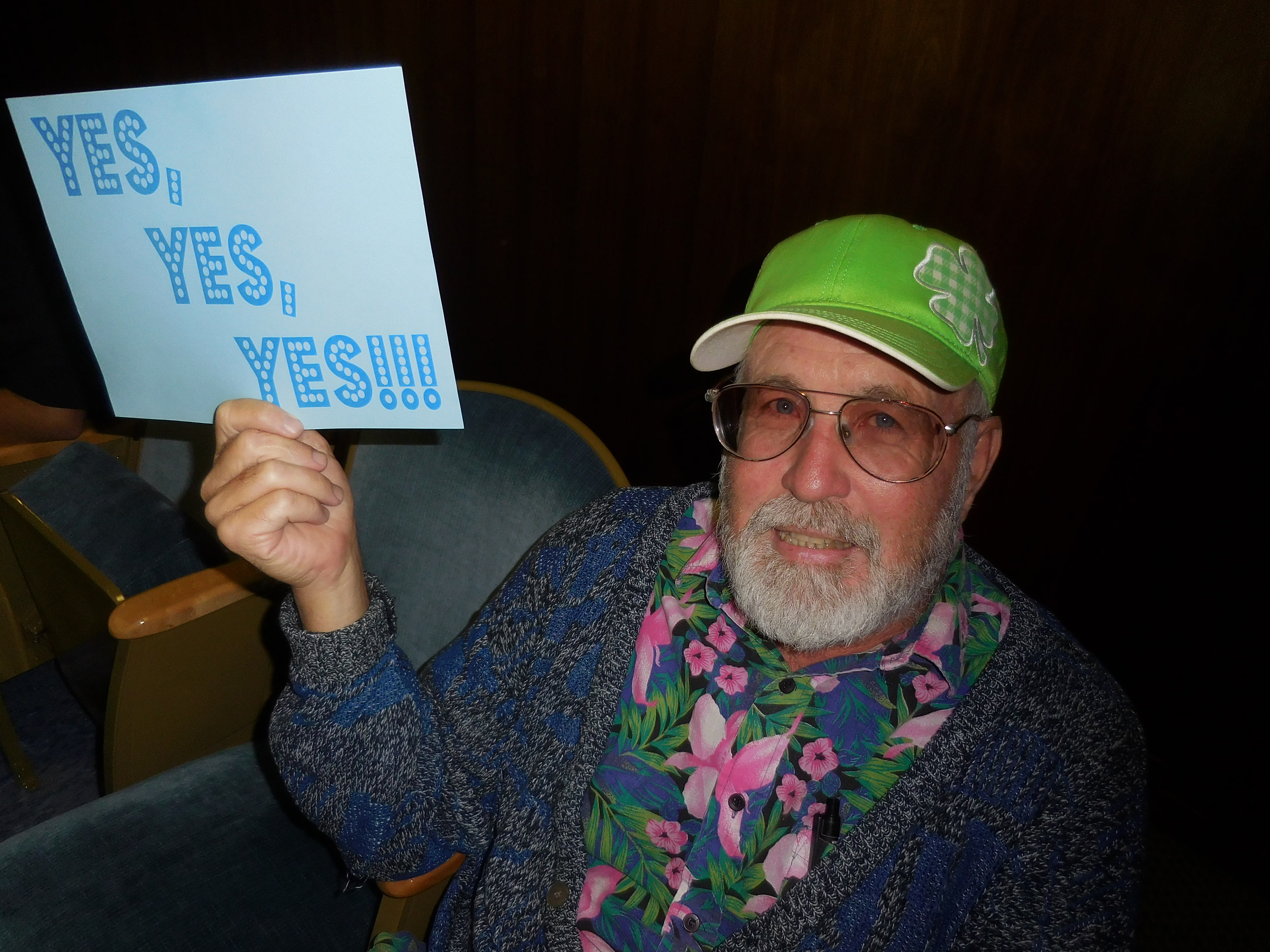 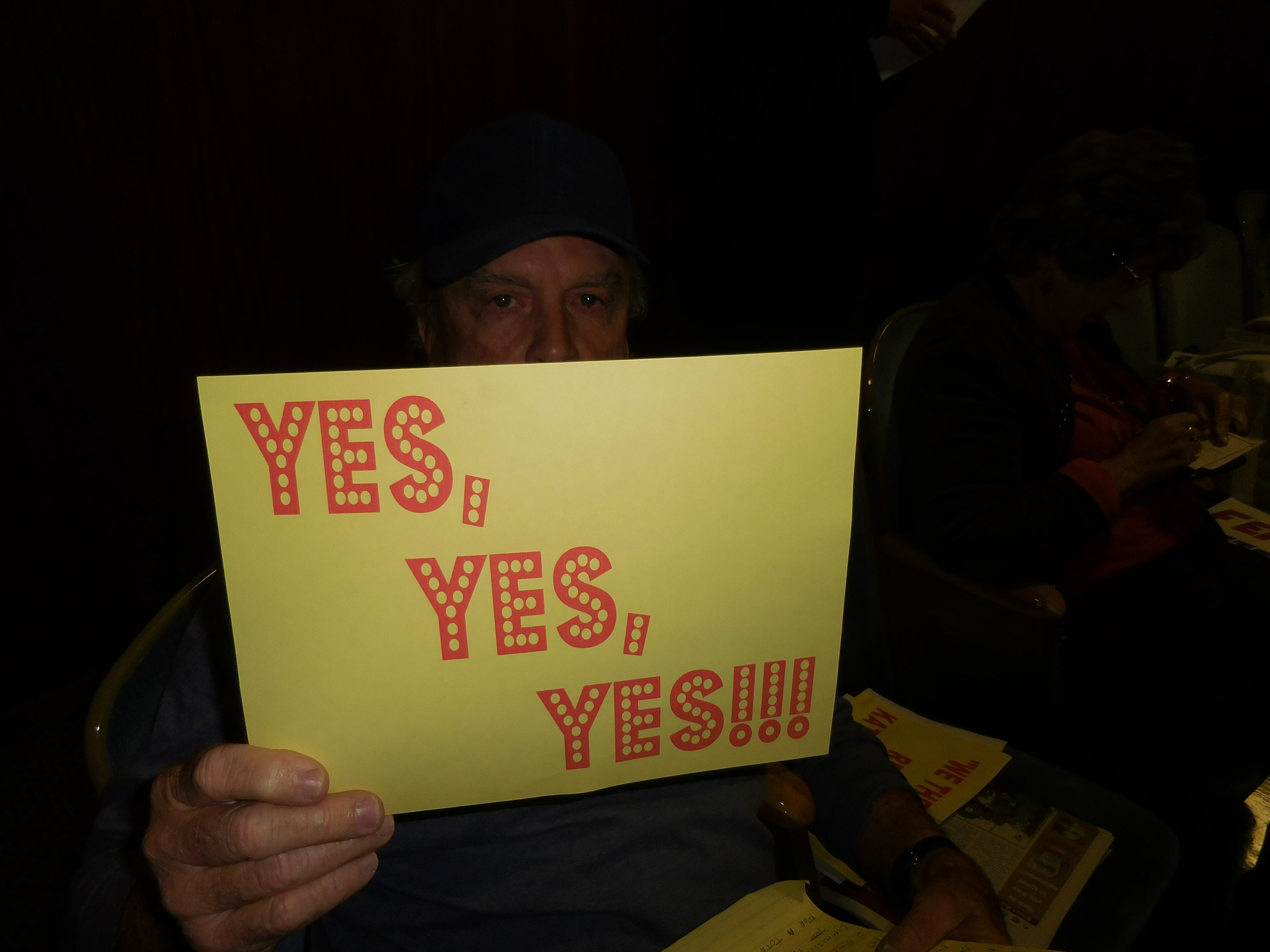 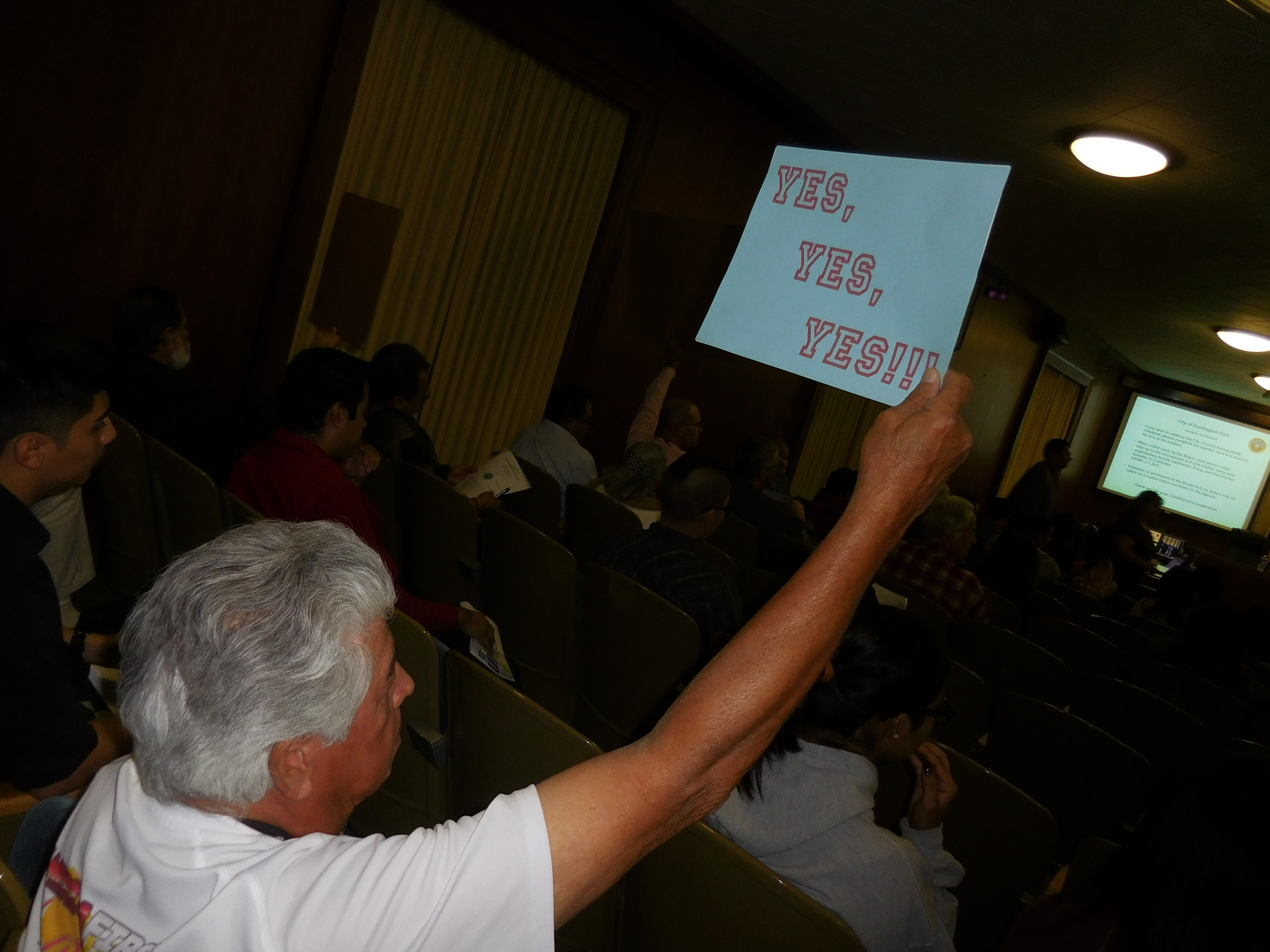 BACKGROUND: The local newspaper, Los Angeles Wave, reported the following information about We The People Rising when the NEW City Manager Cisneros was appointed on 10/20/15.

Cisneros also must deal with protests from a regional group called We the People Rising, demanding the removal of two advisory commission members who are not legal citizens —  Francisco Medina and Julian Zatarain.

The group, including residents and non-residents, have called for the removal of Medina and Zatarain and the recall of the council majority except Amezquita, who was the lone dissenter to the appointment last August.

They protested for the third straight council meeting Oct. 20. Arthur Schaper of Torrance challenged Cisnoros’ previous comment that the two have been formally installed after passing the required Live Scan background check, saying that requires a Social Security number, not distributed to non-citizens.
http://wavenewspapers.com/huntington-park-appoints-cisneros-city-manager/

Come and hold a lap sign – SPEAK OUT during public comments!