1-15-2016
Santa Clarita Mayor Pro Tem Dante Acosta gets caught lying for Rep. Steve Knight
Friends,
Welcome to the 2016 election year.  Presidential election years are a time when much of the public starts paying attention, and actually has some influence over the decisions that will be made in Washington over the next few years.
This year will be a journey for us, as we engage our elected officials and promote our agenda; which is the hiring of American workers and to seek to influence elected officials to respect and uphold our immigration laws.
As we engage those who have been elected to represent us, we will chronicle our observations and our experiences.  Every office visit we make is an adventure, we never know what will happen, but quite often we learn a great deal.   Sometimes we make scheduled visits, and sometimes we make unscheduled visits,and whatever our activity we will document for you what we see and learn.  For those that can join us, thank you,  for those that can’t we will show you everything that we see.
First,  I would like to introduce who we are. Look at the photo below, can you pinpoint the type of people that we are?  We are Moms, and Dads, Grandparents, and friends, and neighbors.  Our ranks change with every meeting, but our motivation is always  to stop the out of control immigration policies that are depressing American wages, and causing chaos in our communities. 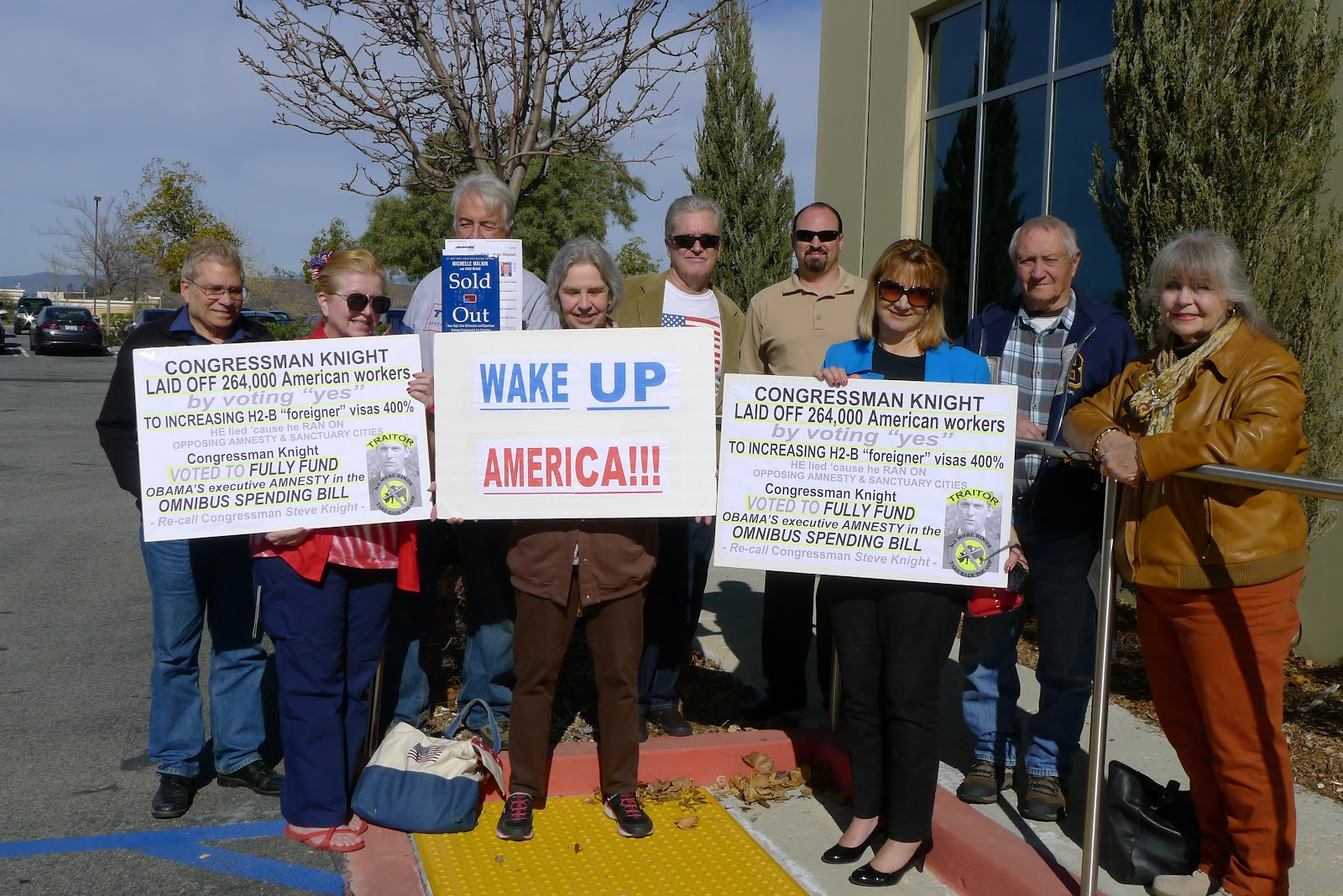 We decided to start the year off by delivering the Numbers USA immigration reduction grade card to California Republican Rep. Steve Knight.
Rep. Steve Knight has had a rough first year, It seems he has some anger issues, and early on shot his mouth off while being filmed and the video tape of it made worldwide headlines. (Boy do they hate those video cameras). One obvious recommendation to Rep. Knight would be to not make threats to Constituents and voters while several cameras are video taping you.
Steve Knight volunteered to take the Numbers USA survey weeks before the Nov. 2014 election, specifically to improve his Numbers USA ratings and did in fact improve his ratings by represented himself as a strong champion of opposition to amnesty for illegal aliens and limiting foreign worker importation on the survey.  He started off with an A and now after finishing his first year,  he’s down to a D+.
In hindsight it seems to me that Knight said what he needed to say to get elected, then quickly ditched the promises that he made.
I know… typical.
Nevertheless, we delivered his grade card, from the organization that he sought out just one year ago to give him the credentials he needed to cross the finish line.
As I previously mentioned every office visit we make is an adventure, we never know what we will see.  Most of the public has no idea what goes on in these offices.  Sometimes everything is fine, sometimes we see transvestite parties going on (I’m not joking).
https://www.youtube.com/watch?v=NrKZ10yRTN8
By the way I highly recommend impromptu visits,
At Rep. Knight’s office we saw hostility,  They didn’t like the unscheduled visit, and they liked the video cameras even less,  I wonder why?
The first striking thing that we witnessed was the employee that we met.  I thought I recognized him, it was none other than my Santa Clarita Councilman who is also the Santa Clarita Mayor Pro Tem;  Dante Acosta.
Apparently, and  according to Dante Acosta our Santa Clarita Mayor Pro Tem, is now also running the Santa Clarita office of Rep. Steve Knight.  (His business card identified the Mayor Pro Tem as Rep. Knights field representative).
:We wouldn’t have known that if we didn’t stop by.
Then I remembered that Dante Acosta ran unsuccessfully for Congress as a Republican candidate in the 25th district a few election cycles ago, and challenged then sitting Congressmen Buck McKeon.  Buck McKeon  was at one time a stellar champion against amnesty for illegal aliens, but after 20+ years in Congress he was getting very wobbly on the issue, which was sad.  (I would like to mention that we made many unscheduled visits to McKeon’s office and we were always met graciously).
I don’t know what motivated Acosta to run against McKeon, but Acosta advertised himself as a Tea Party challenger.  Sadly this seems to me to be yet another example of a
“Tea Party Conservative”  that turns on the base once they get in office and gets a taste of the establishment gravy train (Think Marco Rubio).
Please watch the first video and note how Acosta says to us that he never cancels an appointment. and will meet with the gathered voters an hour and a half later ( once the cameras and signs are discarded).  Link:https://www.youtube.com/watch?v=qfz06-fU0rw
Now observe the second video after we left the meeting,  the security guard comments to us that Knight’s office has instructed him to deny us access to the building if we try and re-enter.
Link:
https://www.youtube.com/watch?v=A1dvgy-WFTY
And there you go,  Santa Clarita Mayor Pro Tem, and former Republican Congressional candidate Dante Acosta gets caught lying.
And they wonder why we insist on bringing video cameras.
Friends, the election year is just beginning.  Please join us on our adventures in person, if you want to see what’s going on with your own eyes.  If you can’t, no problem, sit back and relax, and we’ll show you everything we see and learn.
Until next time.
Greg Aprahamian