Celebs, supporters of Dream Act face off with anti-DACA protesters 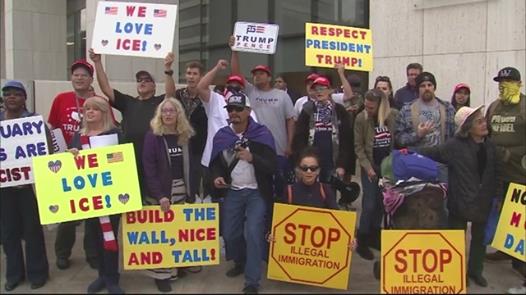 Supporters and protestors of those DREAMERS clashed in West LA Wednesday in front of Senator Feinstein’s office.

Congress has about two weeks to pass a long-term spending bill.

Democrats want any deal to go hand in hand with resolving DACA. Celebrities like Alyssa Milano, came out, backing the DREAMERS.

“I want to know this is at the top of her agenda, that the dream act now is going to be something she fights for and she gets out in front of,” said Milano.

But anti-DACA supporters showed up first, claiming the area in front of the building.

“There’s a saying, the early bird gets the worm, so we arrived early…We have homeless, veterans, unemployed Americans, and we believe they should be the focus of legislation not those here in our country illegally,” said DACA protestor Robin Hvidstom.

Police moved DACA supporters two blocks away for their rally.

Dreamers like Jonathan Cardona, says he doesn’t understand why protestors would  block them.
“We’re not here to take jobs we’re here to create jobs,” said Cardona.

Anti-Daca protestor Raul Rodriguez says he fears illegal immigrants pose a security threat though.
“We are against illegals coming into this country because they are not obeying our laws,” said Rodriguez.

But one of the requirements for DACA is that they cannot have been convicted of a felony or misdemeanor.
DACA supporter Bradley Whitford pointed to the heart of the DACA program.

Now the DACA supporters who met with Feinstein’s team says they are committed to fighting for the DREAMERS.