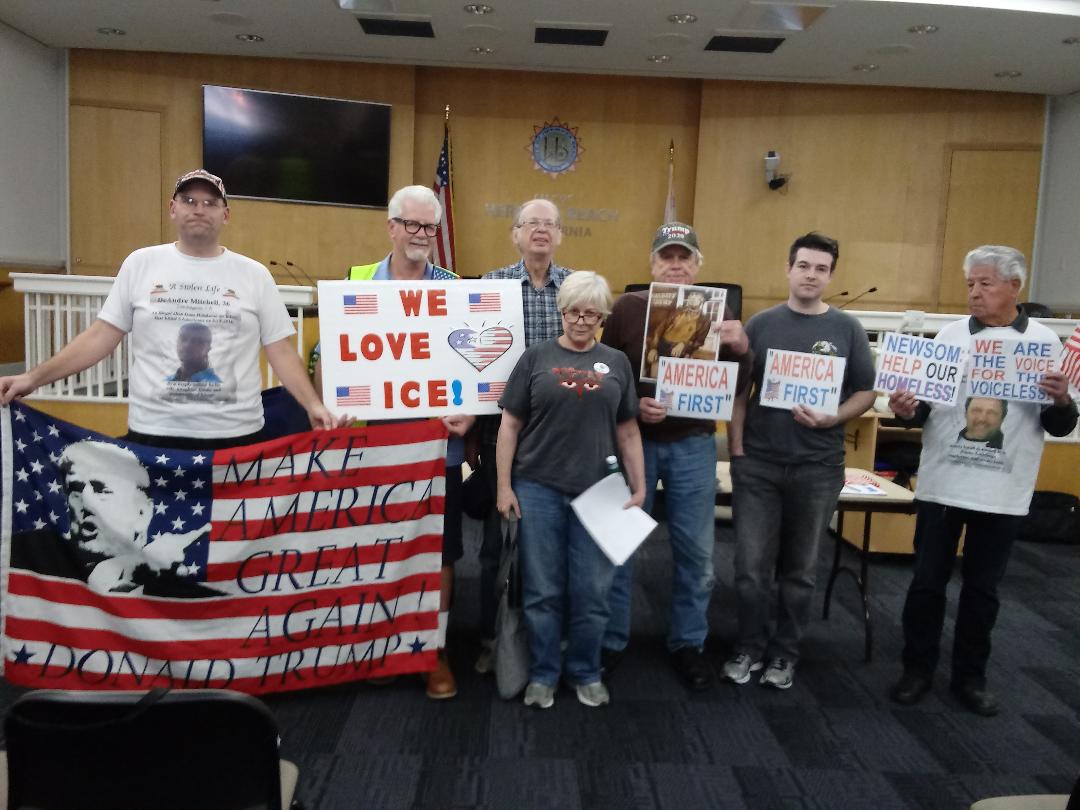 Hermosa Beach, CA – ICE SUPPORTERS attended the public forumIllegal Alien Privilege in a California beach city in 2018…The Hermosa Beach Police Department presented their statistics on inmates in their jail who were served with ICE detainers at the Truth Act Community Forum.In 2017 BEFORE THE CALIFORNIA SANCTUARY LAW, the Hermosa Beach Police Department was served with 4 ICE detainers and honored all 4 ICE detainers. That means the illegal aliens upon release from police custody were then transferred to ICE detainment.2017 ICE CONTROVERSY…It was stated during the presentation that in 2017, the police department released a criminal alien who was charged with a firearm violation and attempted murder. When this illegal returned 2 days after release from jail to retrieve his car, the police department had notified ICE as ICE had presented them with a detainer. ICE took custody of the criminal alien. However, the Hermosa Beach Police Department was informed they had violated California state law because the criminal alien was no longer in custody of the police and the police department had notified ICE of the illegal alien’s location. ICE provided a detainer request rather than a warrant signed by a judge. So the police department was held accountable for violating state law.In 2018, the Hermosa Beach Police Department was served with 5 ICE detainers and did NOT honor even one of them because none of the crimes “qualified” as meeting the standard of the  new 2018 Sanctuary State Law crime whereby ICE can take custody of an inmate upon release from jail.So this means in 2018, the Hermosa Beach Police Department released 5 criminal aliens back into the community and turned no criminal alien over to ICE because of the Sanctuary State Law.When the acting police chief and Lieutenant Landon Phillips  were asked about the Sanctuary State Law, they would reply that it is the law and that they have to obey the law.  Both of them indicated that they were completely following the Sanctuary State Law within their jail system.SUPPORTERS OF ICE IN THE AUDIENCE GRILLED THE REPRESENTATIVES OF THE HERMOSA POLICE DEPARTMENT AND PROVIDED MANY SUGGESTIONS, SUCH AS POSTING THE RELEASE DATES OF INMATES ON THE CITY WEBSITE. FRANKLY, THE OFFICERS SEEMED TO IGNORE THE CONCERNS OF THE CITIZENS AND WERE FOCUSED UPON PROTECTING ILLEGAL ALIEN CRIMINALS UNDER THE SANCTUARY STATE LAW: THUS, THE TERM ILLEGAL ALIEN PRIVILEGE.HERMOSA BEACH POLICE DEPARTMENThttp://www.hermosabch.org/index.aspx?page=123

DHS Secretary Nielsen announced a renewed effort  aimed at  the Central American migrants crossing the U.S. border  to not be released into the USA but rather wait in Mexico until their court date.

“The crisis at our border is worsening, and DHS will do everything in its power to end it,” said Secretary Nielsen. “We will not stand idly by while Congress fails to act yet again, so all options are on the table. We will immediately redeploy hundreds of CBP personnel to the border to respond to this emergency. We will urgently pursue additional reinforcements from within DHS and the interagency. And we will require those seeking to enter the United States to wait in Mexico until an immigration court has reviewed their claims.”

The Secretary ordered Commissioner McAleenan to undertake emergency surge operations and immediately increase its temporary reassignment of personnel and resources from across the agency to address the influx of migrants.  According to the directive, the CBP Office of Field Operations shall accelerate its planned reallocation of up to 750 officers to Border Patrol Sectors that are affected by the emergency. Moreover, CBP is directed to explore raising that target, is authorized to exceed it, and shall notify the Secretary if reassignments are planned to exceed 2,000 personnel.

Secretary Nielsen further directed CBP to immediately expand the Migrant Protection Protocols (MPP), a DHS initiative to return aliens to Mexico to wait during the pendency of their U.S. immigration proceedings. The Secretary directed CBP to return hundreds of additional migrants per day above current rates to Mexico, consistent with U.S. law and humanitarian obligations.  This increase in returns shall include individuals apprehended or encountered at or between POEs. Moreover, the agency is directed to plan for an expansion of MPP beyond the locations in which it currently operates in California and Texas.